Last month I ran in the Running with the Balloons 5k at the 2017 QuickChek Festival of Ballooning in NJ . It was an interesting venue with a unique start to say the least, and a very fun experience. This race report is a little late, so I’ll keep it short and sweet.

So let’s talk about this race!

The race starts out in a grass field, after the hot air balloons have made their morning ascent. That was an incredible sight to take in. After the balloons were off in the distance, it was race time.

The first half mile or so was on that grass field, and the footing was a tad tricky. There were large tire tracks (maybe tractor tracks) on the ground, so I had to be extra careful with how my feet were landing. It was nice and flat at least.

After the grass section we got to a gravel road, which then led to a normal paved road. On the paved road there were a couple of hills which I was not expecting. I thought the course would be almost entirely flat since it was on an airfield, but the off-airfield sections had the hills.

For the first mile I was in a group of about 5 people, chasing the lead pack. I soon realized that if I wanted any chance to catch the leaders I’d have to make a move early, so I separated from the chase group and took off on my own.

The course was pretty uneventful until you get back to the airfield. Unfortunately the leaders were too far ahead and I was never able to catch them, but the chase group didn’t catch me either. I finished about a minute behind the leaders, but also a minute ahead of my chasers, all on my own in that awkward little not-lead pack but not-chase pack spot.

My time was 17:40, a 22 second PR! I was really pleased with that result. It earned me 6th place overall and a little age group award medal.

After the race I hung out with my friend at the festival, picking up as many freebies and snacks as possible, and we stuck around for the evening balloon ascent where I was able to get a bunch of pictures. 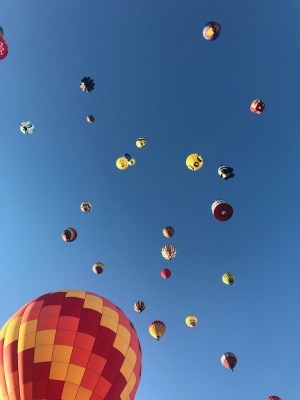 All in all it was a successful race. It’s not every day you get to set a personal record and attend “the largest summertime hot air balloon and music festival in North America” (according to their website).

Have you participated in any special, unique races? Let me know!

I'm a runner and I do runner things. View all posts by TheSpeedydave